but I got it from

Old Norse verb "verða", "to become", and is commonly translated as "in the making" or "that which is happening/becoming"; it is related to the Dutch word worden and the German word werden, both meaning "to become".

as in she becomes a Rainbow Drinker.

Magari: Italian, loosely translates to: I wish!; if only!; yeah right!

Verdia is the jadeblood in charge of the brooding caverns but it turns out she was just trafficking the grubs and selling them to high bloods. It's not as a big of a deal as everyone makes it out to be, in her opinion! 9:/

Verdia was once an ardent follower of the Church of Vasati and was best friends with her Gog (Vasati). The two began a caliginous relationship after Verdia became a Rainbow Drinker.

After burning down the church and defaced the Holy Statue, Verdia joined the rebellion against Vasati and her fellow highbloods. She doesn't really care about who kills Vasati as long as she is able to enact her revenge by:

After the death of Vasati: Verdia absconded to the moon with Haeres (on her airship), where the two completed writing the bible. 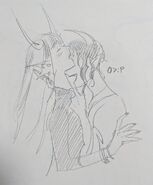 Add a photo to this gallery
Retrieved from "https://flanbowls.fandom.com/wiki/The_Cardinal?oldid=768"
Community content is available under CC-BY-SA unless otherwise noted.