Guillotinekind, Handcuffkind
the Thief of Life, Afrodi steals other trolls lives literally and figuratively by throwing them in her jail. She is much more cruel and unforgiving compared to her descendant.

She was originally loyal to the highbloods and carried out her duties, but she is convinced by Polari and Ardere (as fellow bronzebloods) to join the revolution. During this time she becomes matesprits with Polari. She pulls a few strings to the revolutions side, but after Polari's death she runs away. She wanted to kill the troll who killed her matespirt, but the chance was stolen away from her by Marsos' ancestor. Ironically, the life she wanted to steal the most was stolen from her grasp. She sneaks away into the darkness, never to be seen again.

Her descendant inherited her fondness of Polari's descendant, but her grudge against Marsos' ancestor seems to have settled down into dedication. Venera's mild temperament and desire to stay out of the way also parallels her ancestor's hiding towards the end of her life.

She tends to be a big flirt and act sexy, but she's more often than not just joking. She likes riling people up before she crushes them (so she says). 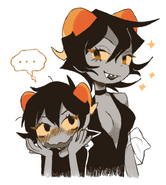 Add a photo to this gallery
Retrieved from "https://flanbowls.fandom.com/wiki/The_Overseer?oldid=732"
Community content is available under CC-BY-SA unless otherwise noted.