as a leader, she catches attention

bludgeonkind
Polari is the Knight of Hope and a great leader whom everyone respects. She is patient and caring, full of hope and positive beliefs. She can be sort of "act now, think later" sort of person.

She uses a spike-ball bludgeon that resembles a star. When she holds it up in battle, her army followers her. (hehehahah thanks vivian)

She is close with Ardere, her fellow rust blood. Her ambitious plans make him nervous, but he protects her well.

She convinces Afrodi to release her from jail and to join the rebellion. She is ultimately killed by Acreta, and hope for the rebellion dies with her. 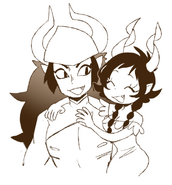 Add a photo to this gallery
Retrieved from "https://flanbowls.fandom.com/wiki/The_Shepherd?oldid=730"
Community content is available under CC-BY-SA unless otherwise noted.